Captivity: Not Good For Man Nor Beast 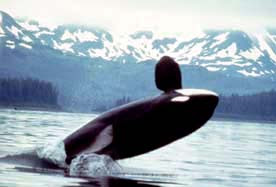 A couple of years ago, I blogged about the increasing violence among disenfranchised elephants. Growing up being removed from the company of older, wiser adult animals, potentially seeing members of their families slaughtered for tusks or for sport, and driven off of lands taken over for farming, elephants are increasingly turning to violence against humans, other animals, and each other.

Now this week we have yet another case of intelligent animals with strong communication skills and close relationships who have taken to fighting back. With the Orca attack at SeaWorld this week, we are confronted with the issues around capturing sentient beings in their natural habitat and forcing them into a life of slavery and confinement for our entertainment purposes. I have to admit I've been to more than a couple of marine mammal shows at zoos, aquariums, and SeaWorld itself. This excellent article by Alexander Cockburn is making me think I will not ever be doing that again. These types of attacks are far from rare, and often are even coordinated between the animals in the tank. It's possible they are not so much random as deliberate acts of retribution. Having swum in the wild with cetaceans on more than one occasion, I have always been struck by the very feeling of intelligence you get from them. It's hard to believe that they don't feel much the same way we would if pressed into a life of servitude and enforced performance.

I will be interested to read the book mentioned in the article as well: Fear of the Animal Planet: The Hidden Story of Animal Resistance by Jason Hribal
Posted by Robin at 11:58 AM No comments:

I put the lid up on our new cold frames today because it's been so nice and sunny. But then later I forgot and let the chickens out to forage. Of course they found the cold frame and all of the tasty little teeny plant shoots within. So there goes my veggie starts. Wah!

Chalk that one up to experience, I guess.
Posted by Robin at 9:08 PM No comments: 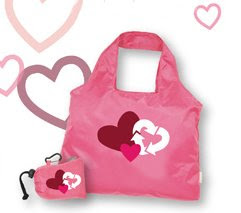 My favorite re-usable bags are Chico Bags, I've probably raved about them here before because they're so lightweight and fold up into teeny-tiny stuff sacks just like little sleeping bags that dolls might use. They hold even heavy stuff and unlike canvas bags I don't forget them because of the nifty carabiner clips they come with that let me clip them onto everything in sight. I wish I'd seen their new Valentine's bags before today, aren't they cute??

So today I'm at a store across town and I tell the checker I don't need a bag because I brought my own, but she had already started putting things in a bag, so she takes the two items out and then throws that bag in the garbage. Like two self-contained rolls of masking tape are going to contaminate the bag. Sometimes I wonder if there's a little "Piss off the environmentalist" board game that they secretly play where you get points for something like that. Maybe the lady who almost ran me over in the crosswalk today with her 80-ton SUV talking (now illegally) on her phone was playing too. Or maybe it's just that they don't really think anything of just taking a perfectly good plastic bag and throwing it away for no reason whatsoever.

But while the checker was wasting the bag, it occurred to me how much the culture of where we live plays into our actions. Strangely, although I was just across town from where I live, the culture of this side of town is very different from the culture on that side of town. They could really be two separate cities (which is evident every time we have elections here and the votes are split 50/50 conservative/progressive.) In my side of town, where I shop for groceries the checker just sits there expecting you to pull out your cloth bags and start putting the food in them. If you don't do that in a reasonable amount of time, they say "Oh, do you need a bag?" and pull one out for you. On the other side of town, the goods are whipped into a plastic bag so fast you can't even get the words out to tell them you don't need it before they're ripping it off of the little rack and handing it to you. Sometimes if you're really lucky, they'll put one item per bag and even double-bag the heavy things so that by the time you get home you realize you've consumed not one or two but seven or eight bags. I guess no one blinks an eye at this over there.

Where the culture expects you to bring your own bags, you actually feel kind of bad when you don't have one. No one actually makes you feel bad, but it's clear that you're not following expectations when you don't have them. You feel keenly that you're out of the ordinary if they have to pull a bag from the small stack under the counter. Where the culture expects that you'll just consume endless bags, you might not think twice about what that really means to the world. 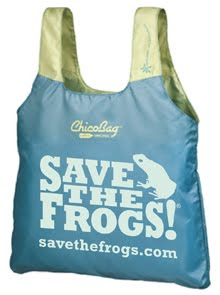 I know bags are a relatively small issue in the grand scheme of things (compared to say global climate change or peak oil) but they're just one indicator of how the culture around you can influence everyone's actions. If locker rooms or showers are provided at work, the message is clear that arriving by bicycle or on foot is not only acceptable but encouraged. If people scowl at you when you carry your helmet into the building or poke fun at your two-wheeled transport, it can change the way you feel about it. The only way a culture changes is by individual action, so while our actions might feel like drops in a bucket, eventually that bucket fills up and tips things in another direction entirely. Our actions are more than the sum of their individual parts, they're creating a culture in which everyone feels more comfortable acting that way as well.

By the way, if you love frogs, you can get this cool custom Chico bag by becoming a member of Save the Frogs.
Posted by Robin at 10:12 PM 2 comments:

One More Reason to Not Use Toxins

This is just so sad. A family lost two little girls (ages 4 and 15 months old) after hiring a company to use chemicals to eliminate voles from their lawn. The pellets used mixed with water to release deadly phosphine gas. It's pretty unthinkable to me that this sort of thing is even allowed under law. As it happened, the gas entered their home, possibly through cracks in the foundation. However, as soon as this kind of poison is laid down in a suburban area, there's no telling what it could kill (pets, other kids that might venture onto the lawn, other wild animals, fish in streams that the water drains to). I can't imagine what this family is going through, don't want to think about what it would be like to lose two of your children in a week. My heart goes out to them.

At the same time, we simply can't put poison into the environment and think that it's okay.
Posted by Robin at 10:00 AM No comments:

Veggies From the Sunroom 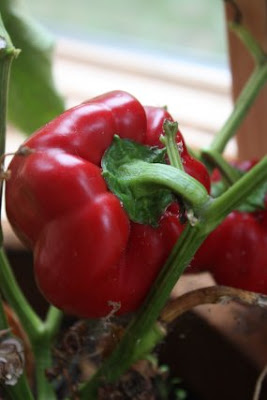 We enclosed our little front deck this year, turning it into a much-needed entrance to the house (formerly you had to stand out in the rain trying to get the front door unlocked since our door didn't even have a little roof or awning over it). The side-benefit is that, since it is south-facing, it's a nice little passive solar room. In the winter, it heats up nicely (and will do even better once we get finished putting tile in there), and in the summer it keeps our front door shaded from the blistering afternoon Western sun. All in all, it does a great job of passively heating and cooling the entrance to our house.

A little side-benefit is that it functions as a bit of a greenhouse as well. I brought in the last of the pepper plants from the garden in the fall and just picked the last fresh red peppers this week (that's them in the photo!). The last few were a bit small but still delicious. I think the sunroom will be a great spot to put some garden starts as well, and it's about time to get thinking about that now.

Also on the current docket: hubby is pruning the fruit trees, and just started building our cold frames with some glass doors he picked up at a garage sale last summer. Looking forward to expanding our growing season even more!
Posted by Robin at 10:10 PM No comments: