A Ghost Bike has been placed at the site of the fatal bicycle crash here in Eugene that killed David Minor. The bike is surrounded by flowers and hung with photos and messages. The ghost bike program draws attention to the place where a fatal car-bike collision has occurred, thus hopefully keeping it in the consciousness of the drivers and cyclists who move past that spot on a daily basis. They also remind us of the humans whose lives ended on that particular spot, that they were more than just a blurb in the daily newspaper, but a person with a life and history, friends and family.

When I saw my first ghost bikes, outside of Forest Grove, Oregon where I had gone for a triathlon, I had no idea what they were. I pulled over and read the signs, discovering that in that particular location in May of 2006 Darrel and Sheryl McDaniel, a retired couple from Hillsboro, were killed when a motorist drifted onto the shoulder of the road and struck them. If I never have to see another new Ghost Bike, it would be a good thing. As more and more cyclists take to the roads (I recently read that it's approaching a 100% increase in cyclists nationwide), we can only hope that there will be an increase in safety as well. I have talked to more people recently who started riding their bikes again, and I think that can only increase their awareness of bikes on the roads when they themselves are riding. On the other hand, I've also been hearing around the bicycling grapevine that aggression from motorists towards cyclists is up, possibly because of the large numbers of cycling newcomers and possibly because of general frustration and tension from high gas prices. Probably us cyclists will experience a little of both - increased awareness and increased tensions, so more than ever I am alert when I'm out there biking somewhere.
Posted by Robin at 9:17 PM 1 comment:

A Day in My Life 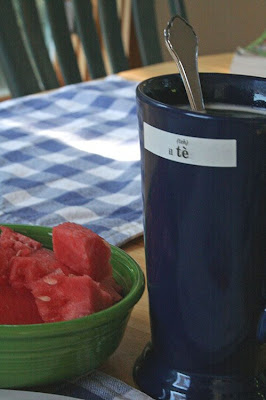 This is one of those rare blog posts that goes on all three of my blogs. This one's relevant to all because it's just a snapshot of my everyday existence. On a parenting list I'm on, we did this last year too: we each took photos throughout an entire day, and that way you get to see the average day in each person's life - what their dinner plates look like and where they go and what kind of slippers they wear, that kind of thing. So if you want to see all the nitty gritty of my life, you can check out A Day in My Life, 2008. And if you're really all that interested, my Day from 2007 is also still up. I found the similarities between the two of them a bit eerie. I have some routines that are pretty engraved in stone. I drink from the same tea mug, hang my laundry out at the same time, and make pizza for the kids once a week. But many things are different, too. The freaky snake in the high chair has been replaced by a cuddly teddy, that's a big improvement at least.
Posted by Robin at 1:20 AM 2 comments:

Labels: A Day in My Life, ordinary days

Worming Their Way In So, there's not many things in life better than picking ripe black-red cherries right off the tree and popping them into your mouth, still warm from the sunshine. For years, our neighbors have let us pick off of their massive and abundant cherry tree, and it has become something to look forward to in the early weeks of the summer as we watch the cherries ripen.

Last year, the house was sold and the new owners had the tree trimmed right in the middle of summer, by just a gardener who obviously knew nothing about tree trimming. I thought at the time that the outcome was probably not going to be good. For one thing, the tree looked leggier after the trimming, and it wasn't a good shape, especially for a fruit tree. For another, the season for trimming is not while the sap is running strong during the fruit-bearing season. Sure enough, this year the damage has appeared. Unpleasantly, we only discovered after eating many cherries from the tree (eewwwwww!) that nearly all of them have worms. So cherry processing this year took a lot more time and energy as I had to pit each cherry and remove worms instead of just using the cherry pitter on them. Also sadly, the tree only produced about a third of what it usually does. Now of course it's not our tree, so I'm definitely not looking a gift horse in the mouth here. But it's sad when something that has been a regular producer not just for the owners but for several families in the neighborhood is mangled just via someone's non-knowledge of managing a fruit-bearing tree. Several other fruit trees in the neighborhood underwent a similar fate this summer as owners with no knowledge of proper pruning and maintenance hacked away at them. As food prices grow, one can only hope that people begin to appreciate and cherish the treasure that a good producing fruit tree can be!
Posted by Robin at 8:53 AM No comments:

Things My Kids Must Never Ever See My kids do not need to know that someone out there on the internet makes and sells chicken diapers. As it is, I have to tell Asa all the time that kissing chickens is a bad idea, and I have to discourage the friendlier ones from just inviting themselves into the house. We would soon have ten more housepets (on top of the four cats and two guinea pigs) if the kids could manage to get chicken diapers on our chickens. Then again, if they actually had to clean the chicken diapers, it might not be such an exciting proposition!

There is actually a lady in the movie Natural History of the Chicken (highly recommended by our chicken loving family) that keeps her chicken as a pet, even going so far as to take it in her swimming pool and to the store! She is obviously a proponent of chicken diapers, LOL.
Posted by Robin at 6:26 PM No comments:

Since Mackenzie broke his arm on Friday, I am already feeling the additional pain of not being able to bike places with the kids. I know a lot of folks feel like biking is maybe a difficult way to get around town (especially with kids), but once you get used to it, you start taking for granted that you won't have to find parking, pay for parking, get caught in traffic, and that you'll be out in the fresh air and sunshine having fun along the way. I personally find driving kind of stressful.

On Sunday, we wanted to go to the library, but of course we can't bike, and the bus that runs to our end of town doesn't even run on Sunday (all of a sudden, I also can really sympathize with those not mobile enough to ride a bike who use the bus system for transport). I also would've liked to go down to the Olympic Trials in town, but was counting again on biking there with the kids. You can't find parking within a million miles, and it's a huge hassle to try to drive there.
Posted by Robin at 11:44 AM 1 comment: Time magazine has this story on "Edible Estates", discussing the return of gardens to front yards, and how it builds community. I know in my town, vegetables are sprouting up all over the place, and I think it's time I take out my camera and post a new edition of last year's "Grow Don't Mow" photo essay from my neighborhood. In our own front yard, the cherry tree we planted with our dog Sabre's ashes last February is bearing beautiful fruit this year, and we've been enjoying "Sabre cherries" all week. All of my new evergreen blueberries fruited too so we'll be looking forward to tasting those soon! We went strawberry picking last week and got a flat of just gorgeous berries. It's amazing that many people may never know what real, fresh-picked strawberries actually taste like. Side by side with those overblown tasteless things they sell in the supermarket, there's just no comparison. I made up a big pan of shortcake, and we haven't gotten tired of it yet!
Posted by Robin at 11:34 PM 2 comments: