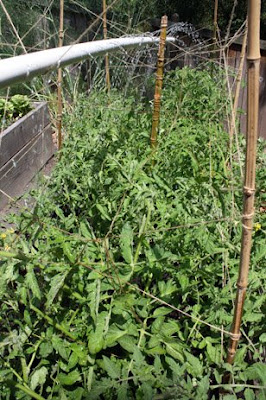 We haven't planted tomatoes in the garden this year. No, we've planted a veritable tomato forest. We had the idea that since we use a lot of tomato sauce throughout the year, it would be a good idea to just plant bunches of tomatoes and then can a whole ton of sauce, pasta sauce, salsa, etc.

It sounded like a good idea at the time.

Now, looking at the tomato forest, I have to admit I'm a bit daunted by the entire prospect. I've talked with a couple of friends about having "Food Preservation Fridays". As soon as harvesting time starts, maybe we'll have all of the kids over to play in the back yard with the sprinkler and trampoline and us moms can go down to the basement kitchen where its cool and just take turns canning like crazy. It sounds like a lot more fun than trying to do it all myself, while running the three-ring circus of kids, pets, and household stuff. That's the idea anyway, I'll let you know how it works out once the forest starts bearing fruit.
Posted by Robin at 2:13 PM No comments:

AAA To Extend Roadside Assistance to Cyclists in Oregon

Our local newspaper carried this story a few days back, about how AAA will now be extending its Roadside Assistance services to members on bikes. I think this is really exciting news and I'm going to optimistically take it as more evidence of that bicycle tipping point thing I was mentioning recently. As AAA members, our family is ecstatic to know that if we're out on our bikes somewhere on a back road and we get a mechanical problem that we can't fix, we can call up AAA and get a ride home. This is especially invaluable when we've got the kids on the tandems, a situation that's much more difficult than just being a lone stranded cyclist (especially when the kiddos get tired, or hungry, or you really don't feel like flagging down just anyone to give you a lift back with the kids along.)

To be honest though, I was really disappointed to read the responses from local cyclists that they printed along within the article. I'm going to hope that these comments were taken out of context or something, but I think sometimes people get so focused on narrow goals (stop everyone from driving cars, protect the environment) that they can lose sight of the fact that we (as in the human race) rarely do anything in one giant leap. Even that famous leap for mankind on the moon was preceded by unmanned flights, flights that orbited earth, and many many other smaller steps. So yeah, if a cyclist gets stranded it doesn't make much environmental sense to send a big diesel towtruck out to rescue them. But what if the very presence of that diesel towtruck means that 500 more people feel comfortable enough to get out on their bicycles, knowing that if they DO break down by the side of the road they will have assistance? And what if those 500 people are part of a tipping process that then snowballs into their friends and their co-workers and their relatives feeling like the roads are safe enough now to cycle on? Then the presence of that towtruck and its gallon or two of gas might just start to seem kind of trivial.

I said as much in a letter to the editor that was published. I had to hack it down to 250 words to meet the guidelines for print, but here it is in its entirety:

As an avid cyclist and AAA member, I was extremely happy to hear that AAA will now be extending its services to cyclists. I was disappointed though to read the lukewarm response from area cyclists quoted in the article. If we truly want cycling to move out of the arena of the specialist hardcore commuters and road racers, then regular people need to feel comfortable getting out on their bikes. Having to know how to fix their own broken spokes or a frayed brake cable while stranded at the side of the road could be an obstacle to many new would-be cyclists. After all, car drivers don’t need to know how to mend a fan belt with duct tape from their fanny pack, they simply call a tow truck and get their car to a garage. Extending the same kind of service to cyclists could bring many new riders to Oregon’s roads.

I can especially see the availability of AAA as a boon to cycle touring, a form of eco-friendly travel that Oregon businesses and Chambers of Commerce are working to promote in our area. Perhaps some cyclists have never biked past the point that a simple phone call home was enough to get a ride back, but I can tell you that when something goes wrong with your bike a hundred or a thousand miles from home and you’ve got a couple of tired and hungry kids on the backs of your touring tandems and all your gear in a trailer behind you, the AAA truck (big diesel or not) would be a very welcome sight.

Between our road bikes, triathlon bikes, commuting bikes, kids’ bikes and tandems, our family puts on more than a few two-wheeled miles on Oregon’s roads. We’ll be grateful to have AAA’s assistance should we ever need it. Anything that promotes cycling is AAA-OK in my book. So hats off to AAA for jumping in to support Oregon’s cyclists. 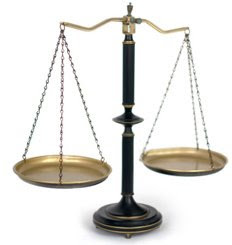 I just finished reading The Tipping Point by Malcolm Gladwell. Ironically, the book has been out since 2002 and I've had a couple of people recommend it to me over the years, but in the last few weeks several people have said I should read it. I guess I hit a tipping point of friend recommendations and so I went and checked it out from the library.

The book itself is excellent reading, and covers a wide variety of subjects from fashion trends to crimewaves to cigarette addiction. For anyone interested in taking sustainable actions and helping them to become trends in the general populace, I think The Tipping Point has a lot to say as well. As you know, I've posted updates occasionally here on the number of cyclists that I see on my evening commute. Well, I seem to have reached some sort of tipping point there because the other night there were simply too many to count. Just as one was zooming by in one direction, another was passing or going by in another. I had to think "did I already count the lady in the red hat?" and when it gets to that point really, what's the point of counting? I lost it somewhere after 65, which I think means the number of cyclists in my commute has gone from "a few" to "a lot" to "too numerous to count individuals". In other words, it's a trend that has tipped.

It seems as if the initial spike in gas prices (you all remember when gas was over $4 a gallon, right?) set the trend in motion, and it was given a boost by the economic crisis. Once there is a critical mass of cyclists on the road, then people who might otherwise feel it's "too dangerous" to cycle begin to feel that it's a safe and reasonable thing to do. Or perhaps they see another parent toting their kids, or another businessman in a suit, or another person who is older than they are riding a bicycle and they realize that they can do it too. Whatever the numerous causes, at least in my town it has tipped and there are cyclists zipping here, there, and everywhere. I think the urban gardens are approaching that tipping point here as well. Last summer I had a few to choose from to take photos of for this blog, and now they're simply everywhere - in front of expensive homes and apartment blocks and duplexes, at least in my end of town. Now when the truly suburban lawns start getting torn up in subdivisions with CC&Rs, then I'll say for sure that urban gardening has truly tipped.

In the meanwhile, if you're already tired of your fluffy summer reads, let me be one of perhaps the many friends who will recommend that you read The Tipping Point.
Posted by Robin at 10:57 PM 1 comment: 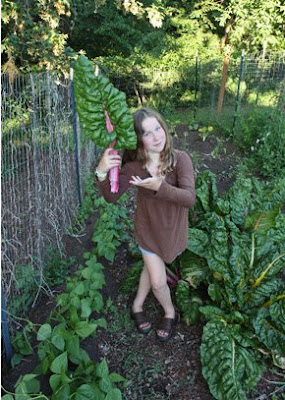 It's that time of year, when the garden just explodes with produce. Our rainbow chard plants are approaching four feet tall! As you can see here, just eight gigantic leaves supplied our family's veggie needs for dinner and weighed almost two pounds. I remember when we moved here our neighbors grew these amazing plants like this and I wondered how they did it. The first few years my chards and spinaches were just puny little things, but little by little as I mulched more and composted more and learned about cover crops and all of that stuff, our yields have gotten better and better and now it is I that has The Chard That Ate New York (cue corny B-movie music...) 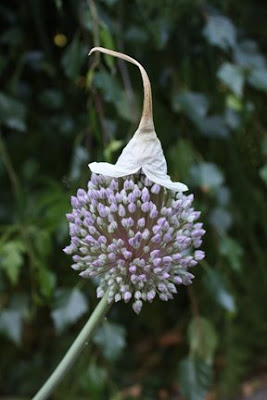 To celebrate our bounteous harvest, our flowering onions have all decided to put on party hats for the occasion. It just cracked me up to see them all wearing their cute little hats. I have to admit that as proficient as I have become at growing chard, I'm still pretty clueless about the onions. They keep cropping up, and I keep not knowing what to do with them and when to harvest them. One of these days I'll figure that out too. The great thing about gardening is that you can really just keep muddling along and as you gain experience things just fall into place a little at a time. For now, the onions have gone to seed and are just sitting there looking festive. By next year, they may be gracing our hamburgers.

One more thing to celebrate this week is Food Independence Day, where we can show our patriotism by eating locally sourced meats, fruits, grains, and veggies. I know that our 4th of July steaks grew up eating the grass of our own valley, and that the lettuce on our burgers comes from 10 yards away. What better way to remain independent than to support our local farmers, ranchers, butchers, dairy farmers, and markets, eating American food!
Posted by Robin at 11:56 PM 1 comment: